Midwest GeoSciences Group recently received an unexpected and cherished gift.   In response to receiving a Hydro(beer)ology Pint Glass along with the pint koozies, Tim "GeoMan" Miller, created a brilliantly designed tribute to the GeoMan concept.

It's Tim Miller's design.  There is no other tribute like this one. He created this platform from his personal vision and then made it with this hands using wood, paint, and a wood burner.

Tim created this platform to hold a "his" and "her's" Hydro(beer)ology Pint.   And although I appreciate Tim's kind words about the GeoMan concept, it's a humbling gesture he used in writing. 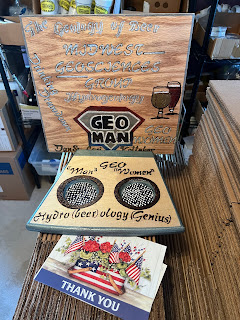 Tim is a very, very special friend in my life.  He lives in Raleigh, North Carolina today but he and I grew up in the same small rural town in Illinois.  Tim and I were close friends from Kindergarten and we remained friends through elementary, middle, and high school.  He was a notable HS athlete but my favorite times with Tim were during our summertime baseball seasons when Tim would pitch and I played short stop.  I'm also going to mention our mutual friend here too, Bob Crippen, who was also a close friend since childhood and was our baseball teammate too.  Bob often was the catcher behind home plate for the times that Tim pitched.  Bob moved to NC last year.  Today these childhood friendships are stronger than ever.  I don't take them for granted.
So when this personalized item arrived in the mail a few weeks ago, I knew that there's no official Thank You that could express how grateful I am for it, but more importantly for friends like Tim (and Bob).   -Dan Kelleher
Posted by MidwestGeoBlog at 4:59 PM 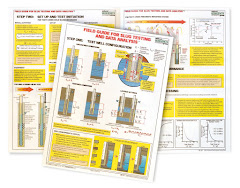